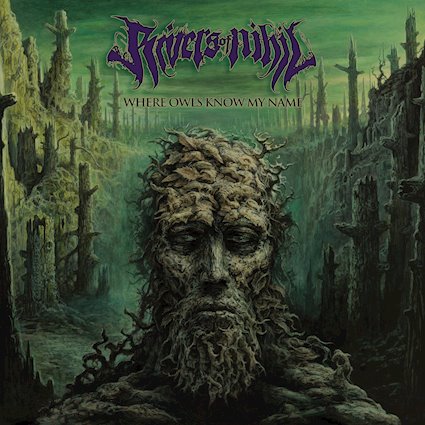 Rivers of Nihil are back with their third album Where Owls Know My Name. And by God is it a good album. Be prepared to sit back, and enjoy the musical fantasy that the band from Reading, PA have created.

Cancer/Moonspeak and The Silent Life are a brilliant opener to the album bringing a sense of chaos and frenetic energy to the album with Brody Uttley and Jon Topore, the guitarists for the band really shining through. A Home is a reflective and medium-sized song, that brings a respite for listeners.

Old Nothing is haunting and angry, with the guitars providing the perfect melody of chaos and confusion to go with the vocals of Jake Dieffenbach. Subtle Change is another monster of a song that sounds like a lion roaring into action combined with some techno skills. Terrestria III is an interesting number mixing electronics and solid rhythms to create a beast of a song. Hollow is a mournful song, one that transcends the usual template of metal songs, bringing heaviness through the growling vocals of singer Jake Dieffenbach, and the tempestuous guitars of due Uttley and Topore.

Death is Real is just as heavy as the name suggests. With a slow start giving way to heaviness incarnate the riffs and the drums move in time together to create an almost tribal feel to the whole thing. Where Owls Know My Name is the title track and it moves through heaviness, lightness and then pure evil. A song that will make the band a hit when performed live.  The final track on the record is Capricorn/Agoratopia and it is an interesting mix of dissonance and chaos and simple heaviness. A fitting conclusion to the album.

By The Median Man|2018-03-07T17:08:16+00:00March 7th, 2018|Rivers of Nihil|0 Comments
FacebookTwitterRedditLinkedInWhatsAppTumblrPinterestVkEmail