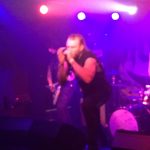 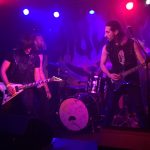 Primitai, a new hat, whilst also being old school, came to support Cauldron at The Black Heart on Thursday, and boy did they bring it.

Fresh off the back of an impressive new album The Calling, the band came roaring right out of the gate with new track “Overdrive,” a song so fierce and spell binding you can’t help but move to it. They followed that up with  an absolute rocker in “Night Brings Insanity,” a driving infectious groover of a song. The reception it got from the crowd was enough to tell you that this is a song and a band that brings the goods.

“Black Rider,” followed and then came a huge moment, for the reviewer personally. “The Calling,” an atmospheric masterpiece that delivers on everything that heavy metal is supposed to be. The band know how to deliver a hook and Guy was on fire during the crowd participation.

This continued with “The Cannibal ,” and “Line Of Fire,” both songs that are simply amazing live. Finishing with “Scream When You See Us,” was a stroke of genius and a fitting finisher.

Primitai have a strong future ahead of them. 10/10.