The first band to greet punters was Leaves Eyes. They delivered an absolutely killer set, bringing thunderous riffs, snarling vocals and some soaring vocal performances to the crowd. The audience rightly went mental during the performances of classics such as “Sign Of The Dragonhead,” “Edge of Steel,” and “Riders On The Wind”. They finished off with magic and fire, and there was even a Viking present. A fitting start.

Next were Cellar Darling, playing their only UK date on this leg of the tour. They came out in force, performing barnstormers such as “Black Moon,” and “Avalanche,”with great pride and precision. After an initially cautious reception, the crowd got fully into it, so that by the time Cellar Darling performed “Fire, Wind and Earth,” and “Challenge,” the entire theatre shook with power and might.

Closing out the night were the headliners, and the heavy metal legends that are Kamelot. They opened up strongly with “Phantom Divine,” kicking of proceedings, from the get go, the crowd was singing and roaring along. Tommy Kaverik sounded in amazing form, and the band provided some solid backing for him. Other standouts included “March of Mephisto,” which saw the devil horns roaring into life and “The Great Pandemonium,” as well as “Veil of Elysium.” Finishing off with “Karma,” “Forever,” and “Liar, Liar,” was a stroke of genius. Lauren Hart was a brilliant addition, providing soaring vocals on “Sacrimony,” and guttural vocals on “March,” as well as “Liar, Liar,”. All in all Kamelot stole the show and performed like the wizards they truly are. 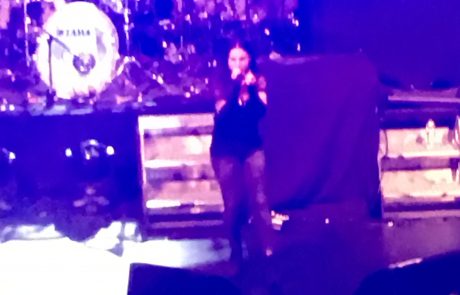