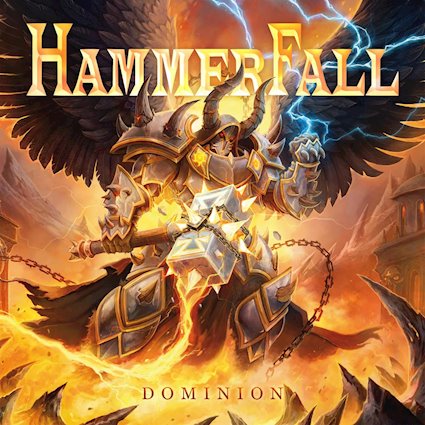 Hammerfall, that legendary band return with a new album. One that is sure to deliver on a lot of promises.

“Never Forgive, Never Forget,” starts off slowly, but eventually gets heavier and darker, and the vocals really give it that added edge. Showing off just where it comes from, it weaves a fascinating picture. “Dominion,” is a rocker, with some thundering riffs, a powerful vocal performance and an edge to die for. “Testify,” another anthem, that really grows on the listener. It comes in hot and heavy, shimmering through the lense and bringing together some fascinating little tid bits. “One Against The World,” an anthem that will get the crowd singing along when performed live. What a massive tune. “We Make Sweden Rock,” another anthem, and one meant to give off that good time feeling. “Second To One,” slows things down, and ensures the listener gets the chance for a breather whilst also basking in those beautiful vocals.

“Scars Of A Generation,” comes rollicking right in, delivering a thunderous roar, one that really gets the listener to sit up and pay attention. A song that will go down well when performed live. “Dead By Dawn,” heaviness personified, with some added oomph to go along with proceedings. “Battleworn,” a song that veers one way and then another, before stepping up the ante. “Chain of Command,” roars its domination and ensures all know just where and how it got there. “And Yet I Smile,” finishes things off nicely.

The album is out on August 16th via Napalm Records.