40 years of pure Teutonic steel, 40 years of iconic GRAVE DIGGER: 2020 marks a glorious anniversary of one of the most distinctive metal bands of German heavy metal! May 29th will see these titans release their 20th studio album, Fields Of Blood, via Napalm Records. But, Fields Of Blood is not just a very special anniversary album, after The Clans Will Rise Again and Tunes Of War, this is the final part of GRAVE DIGGER’s epic Scottish Highlands trilogy!

Fields Of Blood will take us on an emotional journey through Scottish history and into explosive sound landscapes. Driving riffs and epic choruses meet the famous “Great Highland Bagpipes”: In the Highlands, the battlefields of Stirling, Bannockburn and Culloden, the listener will find himself on a rollercoaster between grief and triumph again, losses and wins with the Scottish freedom fighters in an auditory battle of unique traditional metal.

After releasing two previous singles – the merciless banger “All For The Kingdom” ( watch the video HERE: http://www.youtube.com/watch?v=hGPpsU8T8kc) and the touching metal ballad “Thousand Tears” featuring Noora of Battle Beast ( check out the song HERE: https://youtu.be/A9UPVAW5hGw) – today, GRAVE DIGGER present us with a third powerful single of epic heavy metal thunder, “Lions Of The Sea”!

Says frontman Chris Boltendahl:
“LIONS OF THE SEA”… a hurricane of metal hymn… the battle of the Scots against the Vikings… cutting riffing and a chorus that winds through your cortex… you will be startled at night, at sea find yourself in battle and roar the chorus of “Lions of the Sea” from your hoarse throats… over and over again until you are the victorious to leave the battlefield at sea.” 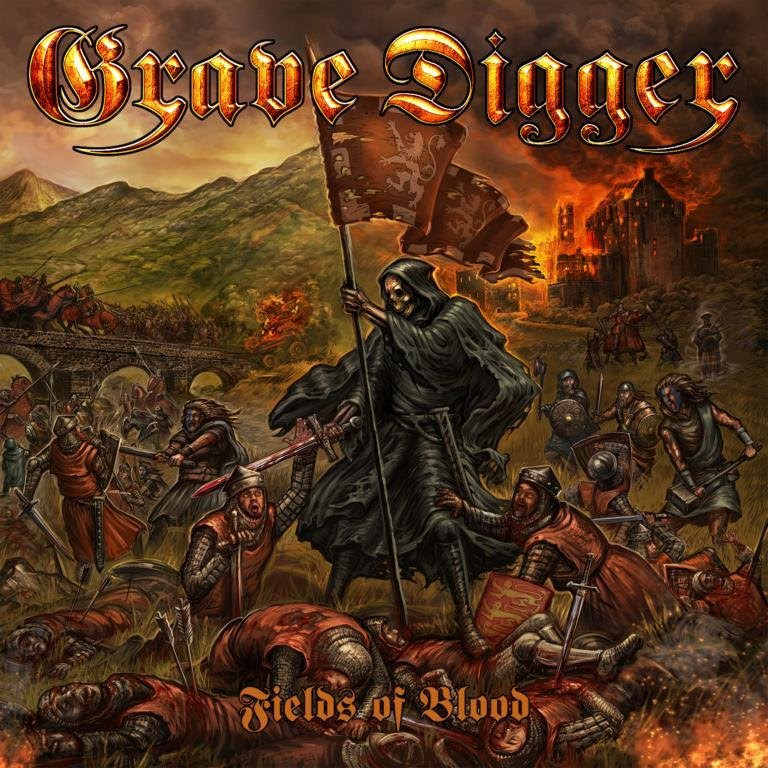 Even 40 years later, the ethos of the band has not changed, and yet Grave Digger sound modern and timeless like never before. They still stay true to their no-frills traditional brand of metal with unwavering pure steel, which nevertheless offers surprises, and celebrates such a special anniversary of one of the most successful German heavy metal pioneers in the most glorious style!

Fields of Blood will be coming out May 29th in the following formats:

Fields of Blood Tracklisting:
1. The Clansman’s Journey
2. All for the Kingdom
3. Lions of the Sea
4. Freedom
5. The Heart of Scotland
6. Thousand Tears
7. Union of the Crown
8. My final Fight
9. Gathering of the Clans
10. Barbarian
11. Fields of Blood
12. Requiem for the Fallen