Canadian Speed/Heavy Metallers ICE WAR, have just signed a deal with Fighter Records for the release of their 4th album “Defender, Destroyer“, which will be released on June 16th, 2020 on CD & 12″LP formats.

ICE WAR is formed solely by Jo Capitalicide (also in APHRODITE) after the dissolution of his previous band IRON DOGS in 2015. Since then he’s been releasing demos, EP’s and albums without rest, highlighting the three full-length albums “Ice War” (’17), “Manifest Destiny” (’18) and “Canadian Classics” (’19) until in early 2020 he signed with Fighter Records for the release of his 4th album “Defender, Destroyer“.

ICE WAR bring back some of the faster and more aggressive sounds, associated with  IRON DOGS. “Defender, Destroyer” is a crude Speed/ Heavy Metal with a Punky twist. Influences range from SAVAGE GRACE, S.D.I., RAZOR, IRON ANGEL, to even the 1st HELLOWEEN EP from ’85. The cover art of this new album was made by the famous fantasy painter Didier Normand and a new updated logo of Daniel Porta. 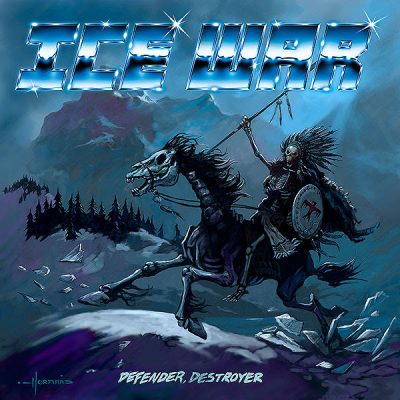 Tracklist for “Defender, Destroyer” is as follows:

Release date for ICE WAR “Defender, Destroyer” will be 21st of July 2020 through Fighter Records on CD & 12″LP formats.